I have mentioned this many times before, but I really wish that my HTC Desire Z worked on enough high speed 3G data bands to use in Canada, the United States, Europe, and Asia. If you can’t be bothered to click on the link to my previous post [averagetraveller.com], here is the quick version of the phone tech talk:

GSM is pretty much standard around the world. Most modern unlocked GSM phones will give you voice and slow 2G data (GPRS/EDGE) in any country where you can get a SIM card. If, however, you want high speed data that is closer to what you get on your home broadband connection you will need to have a phone that speaks the right UMTS/HSPA frequencies for the part of the world you happen to be in.

As my phone is spec’d for use in Canada on the 850/1900 band it gets no high speed data love in Europe and Asia. When I was in Hong Kong earlier this year I toyed with the idea of buying a 900/2100 band phone there but I couldn’t find a reasonably contemporary Android phone for less than $300. Now that I’ve started doing research on prepaid SIM cards in London I’ve noticed that 3 UK has two nice looking phones [www.three.co.uk] available for under £100 and they also offer 500mb of data on a £15 top up [averagetraveller.com]. 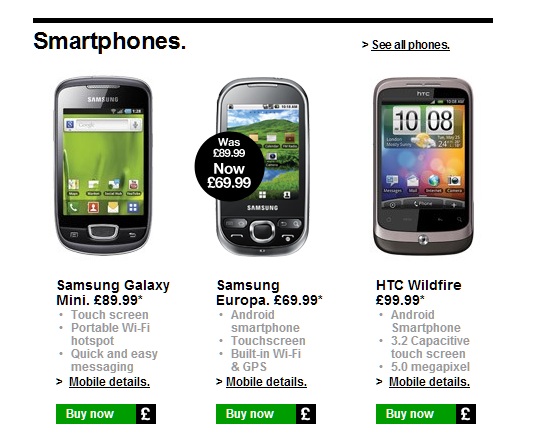 There is a great review of this phone on the 3UK “all you can eat” plan at Android Central [www.androidcentral.com]. It looks like the biggest complaint is against the low-res screen, fixed focus camera, and poor video recording performance.

Review-this has a review [review-this.org] of the HTC Wildfire running on 3 UK. It turns out that HTC has already released a newer version (Wildfire-S) that is also available from 3UK for £199.99.

While the Wildfire has a nicer camera than the Galaxy Mini and looks a bit more stylish, it seems like yesterday’s smartphone. It might also be nice to try a Samsung since I already have an HTC phone. I suspect that my first s top in London may be a 3 UK store to pick up a Samsung Galaxy Mini!

Update June: I’m also looking at the LG Optimus One offered by 3 because it has a higher resolution screen.