When looking for short-term mobile data in Japan the options have been very limited. Until recently it was difficult to get prepaid mobile data SIM cards for Japan because all SIM cards had to be activated using a Japanese phone. Much of the advice on the Internet either points people towards rental phones and mifi devices or explains how to buy a local or visitors SIM and ask a local to activate it for you. Fortunately, there is now an easy choice for short term visitors to Japan because you can get a pre-activated B-Mobile Visitor SIM card delivered to any address in Japan or picked up at many of Japan’s airports. 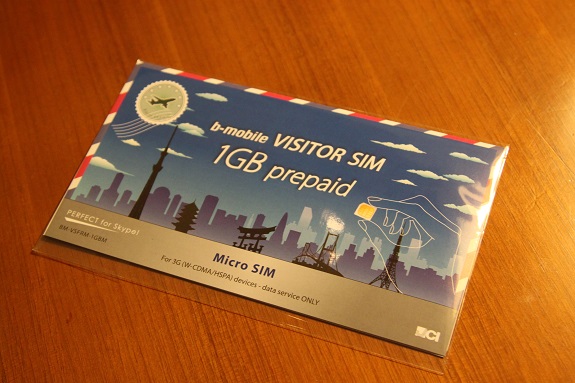 B-Mobile is a mobile virtual network operator (MVNO) of Docomo and offers two versions of  Visitor SIM cards. One version has a 1GB data limit that and is good for 14 days while the other offers a 14-day unlimited data option. Each version costs ¥3980 including delivery. The SIM cards are available in full size, micro, and nano SIM forms.

At first the unlimited data option sounds best until you realize that the data transfer rate is capped at a nearly unusable 300kbps. The 1GB card has no data transfer rate limitations and if you keep your usage primarily to maps, Google translate, social media updates, and light skype usage 1GB should be plenty for 2 weeks. On the downside, these relatively expensive SIM cards do not include any voice services but are workable for a visitor who can get away with using skype or other data based voice and messaging services instead of GSM and SMS.

To get your B-Mobile Visitor SIM working in Japan you have to make sure that your phone will support it and also figure out how to order one online.

Does your phone support the B-Mobile Visitor SIM?

In order to use the B-Mobile Visitor SIM you’ll need to have a phone that is SIM unlocked and supports W-CDMA/UMTS/HSDPA Band 1 (2100MHz) or Band 6 (800MHz) frequencies for data.

A SIM unlocked phone is a phone that has been unlocked to allow usage on any compatible mobile network. Most carriers sell subsidized phones that are locked to their networks to prevent you from picking up a cheap phone and moving over to the competition. Many providers will allow you to unlock your phone for a fee or your phone may have come unlocked if you bought it directly from the phone manufacturer. If you’re not sure you can borrow a SIM card from someone on another network and see if you can make a call on your phone with it.

The W-CDMA/UMTS/HSDPA frequencies used by B-Mobile are standard for European and Asian phones so if you have an unlocked phone from those regions it will most likely work. Newer high end North American smart phones such as the iPhone and Galaxy SIII also typically support these frequencies. You can check the box that your phone came in or ask your phone provider.  Note that some models of phones have different versions depending on where you bought them so be careful here.

The B-Mobile website includes a list of compatible phones but their list is mostly limited to Japanese models. The phones listed on their page should be considered a guide as other phones will work as long as they meet the above requirements; however, if your phone isn’t on the list they might turn you away if you have to call them for support.

The B-Mobile Visitor SIM can only be ordered online and can only be delivered within Japan. As it comes pre-activated for the day of delivery and is only good for 14 days you’ll want to wait until you get to Japan to set it up. It is important to note that you can only order these up to two weeks in advance of when you plan to have it activated. B-Mobile recommend ordering at least a week in advance.

The first decision you’ll have to make is whether or not you want to pick up the SIM card at the airport or have it delivered to your address in Japan.

The Airport Pickup Service delivers your Visitor SIM to post offices located at Japan’s major airports. This option is handy if you plan to fly into Japan during  post office hours but if you arrive outside of business hours you’ll be out of luck. Schedule changes and flight delays could put you at risk so you may want to consider direct delivery.

Direct delivery is what I chose given that I arrived at Narita late at night. The toughest part of setting up delivery was making sure that I got the address correct on the online order form. 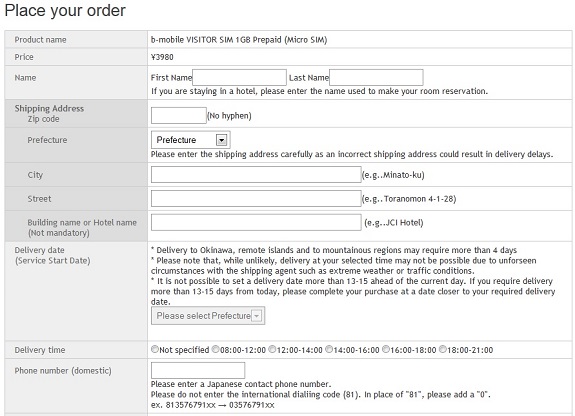 Addresses in Japan are confusing [en.wikipedia.org]. The address system is based on blocks rather than streets, so instead of saying that your hotel is at a certain street address they say that it is Unit x on Block x in Neighborhood x. That in itself is confusing enough for a visitor, but just to make things more complicated the B-Mobile order form asks for City and Street, which you most likely won’t actually know. This caused me a lot of stress when I ordered my 2 SIMS because if I messed it up that would have meant almost ¥8000 wasted. Luckily the order form offers some examples of how to fill in the form which I used to figure out what they are looking for.

Thank goodness that the example city showed the -ku suffix and the Prefecture drop-down box included Tokyo or else I would have tried to use Nishi-Ikebukuro or Tokyo as the city!

I ended up ordering my SIM cards only 3 days in advance of arrival and and the hotel handed me my SIM cards upon check in. Following the instructions we easily set up the SIM card on an iPhone 4, but I had to do some trial and error to get it working on my Samsung Galaxy SIII. More on configuration in a future post.