Whenever we travel with my in-laws they are always kind enough to offer to take the kids and give us a date night out in whichever place it is that we are visiting. With a free night out in Tokyo Mrs. A|T and I did a little shopping in Shinjuku followed up with looking for some late night eats in Shibuya.

Shibuya is famous for its giant scramble pedestrian crossing, huge bright signs featured in almost every Hollywood movie set in contemporary Japan, and the statue of Hachiko the dog. The story of this dog is that Hachiko would wait every day at the Shibuya train station for his master to return from his job as a professor at the University of Tokyo. Even after the professor died the dog would go to the train station and wait every afternoon, becoming a symbol of loyalty. 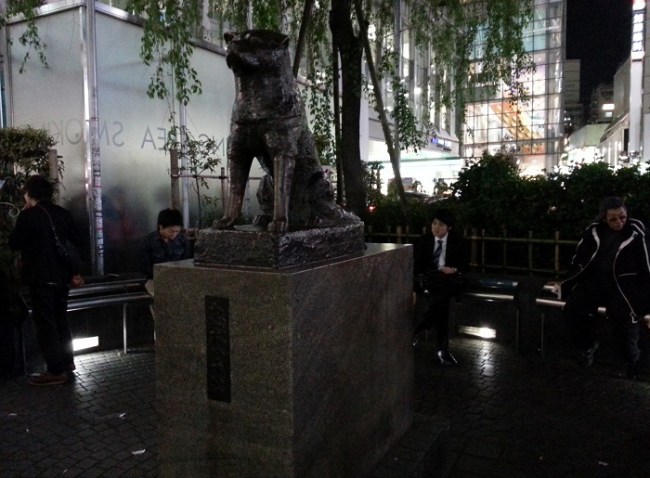 Walking around Shibuya at after 9pm was a little strange as most of the shops had closed and the night crowds had not really formed. While exploring the shopping district at Dogenzaka Street we found some small crowds around a handful of street performers but not much else. We decided to check out Center Gai, a pedestrian only area known for izakaya and karaoke bars.

Not having done a very good job of food planning before my trip, this was going to be a seat of the pants food hunt. We did a few laps, trying not to get too lost, and looked for something yummy. The problem with taking this approach in Japan is that you can’t really look into bars and restaurants from street level in most parts of Tokyo and some of the best places aren’t very clearly marked.

After wandering around without having any luck we got desperate and stopped to look at a restaurant sign with some yakitori pictures. As we were looking an enthusiastic young kid in a black suit offered us a menu to look at. I asked him if he was from that restaurant and he told us in very broken English that he actually represented another place across the street. I wasn’t overly keen on rewarding his attempted poaching of customers and if I learned anything from Hachiko, I wanted to be loyal to the first place I looked at. I told our eager new friend that I would check out the yakitori place first. He politely smiled, nodded, and made his was back across the street.

Charged with the confidence and energy of having done right by Hachiko, we hiked up the stairs and walked into the yakitori place only to find that it was completely empty. Yikes. The staff came and greeted us immediately and we asked to look at a menu before politely smiling and turning around. When we got back to the bottom of the stairs our friend from across the street came back to talk to us.  We agreed to give his place a try despite my rule of thumb against eating at a place where they require greeters to bring people in off the street.

We followed him up a small staircase while he phoned up to have a table set for us. I was a little worried that we were over-committing but having just walked out of another place I was getting mentally prepared to do it again. At the top of the stairs we entered an elevator lobby that looked like it belonged to an apartment building, not a restaurant. Part of me expected that we were about to be robbed. The elevator arrived and our host pushed the button for the correct floor before excusing himself and heading back down the stairs.

So far everything about this experience felt wrong and in any other city we would have probably fled. The elevator ride seemed to take just a little too long but when the doors opened we found ourselves in a little Japanese bar that was almost full of Japanese people drinking and having a very good time. It was right out of the movies, with men and women dressed like they had just come from the office, glasses of various fullness littering tables, and one group singing what sounded like a great drinking song. 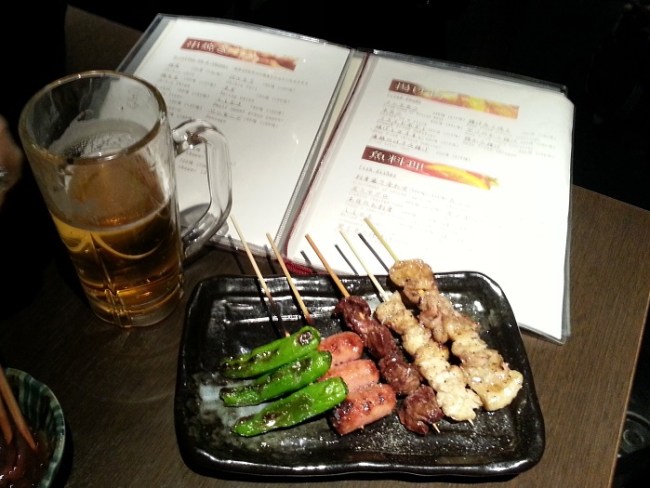 We ended up ordering some beers, various grilled meat skewers, and a very strange pickled squid dish. At each table there was a little call button and pressing it brought a server to the table within 30 seconds! At the end of the night, the food was pretty mediocre, but the atmosphere and the experience was well worth it.

Sometimes getting out of your comfort zone can be pretty rewarding. Being lead to this restaurant rates among the sketchiest things I’ve done on my travels but it seems like these sorts of things usually end up with a story, good or bad! I’m glad this one turned out pretty good.

6 thoughts on “Going Against My Instincts for Food in Shibuya”