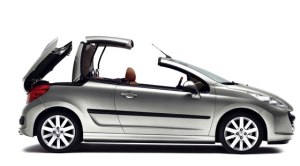 Yay! After striking out yesterday on getting an affordable convertible for our tour of Tuscany I followed one of the recommendations from the Fodor’s message board and checked with Kemwel in the US. Kemwel appears to be a sister company to AutoEurope and they still had the Peugeot 207 CC listed online.

Their reservation line is 24×7 but when I called in last night I was told that the Peugeot is a specialty car and I’d have to call back during east coast business hours. I decided to ask all of my questions while I had the rep on the line. The person I spoke with was very friendly and answered all of my questions about cancellation policies, insurance, and prepayments.

according to them full insurance was mandatory for rentals in Italy and was already included in the posted rate for the car I was looking at. Furthermore the included insurance has no deductible, or “no excess” as their website states. The full amount of the rental would be charged to my credit card but I can cancel with a full refund with at least 48 hours notice prior to my pickup time.

Fast forward to this morning. I called the line again and spoke with another very friendly rep. He took down all of my information and double checked the rates and fees, noting that there is a 3.50 euro per day road tax not included in the quoted rate. He also noted that the car I was looking for was “by request” and that they would have to contact the provider to confirm the reservation.

2 hours later I received an email with the voucher for my “Economy,Convertible,Manual,With A/C Peugeot 207 Convertible or similar”.  I’ve never rented a car via discount voucher before and have rarely rented with anyone other than Avis so I’m still a little nervous. Will they have the car I want when I get there (I’m told all agencies are notoriously bad for that), and what car will I get if they don’t? How much leeway is there on the “or similar” clause anyways? Oh, and it better be left hand drive because I’m not looking forward to driving stick on the wrong side! I’ll update after the trip.

About the Peugeot 207 CC

Now for the part that I’m really excited about. Before I set my heart on picking up a convertible (or coupe cabriolet in Europe, hence the CC) I needed to do some research on the car. My biggest concern was about luggage space as we plan to be hauling two medium sized suitcases. Searching the Peugeot website and some of the review sites offered little help as knowing that the trunk space goes from 350 litres with the top up to 204 litres with the top down didn’t actually tell me if our suitcases would fit.

Searching Google images for Peugeot 207 CC did turn up some pictures which seem to tell me that we might get one or both suitcases in the trunk, but that we could use the tiny backseats for luggage if needed. Backseat storage is a nice option to have as the last time I rented a convertible it was a Pontiac Soltice with no back seat. Any time that we wanted to haul our two small suitcases (it was only a weekend trip) we had to drive with the top up to maximize trunk space. We’ll just have to try to get to the hotel to drop off our suitcases before we do too much touring to avoid having them as obvious targets in the backseat.

Now I just have to cancel my Hertz reservation and keep my fingers crossed that my car is there when I get there.

Update: We ended up driving the car around Tuscany and loved it. Below are some pictures and thoughts about the car. 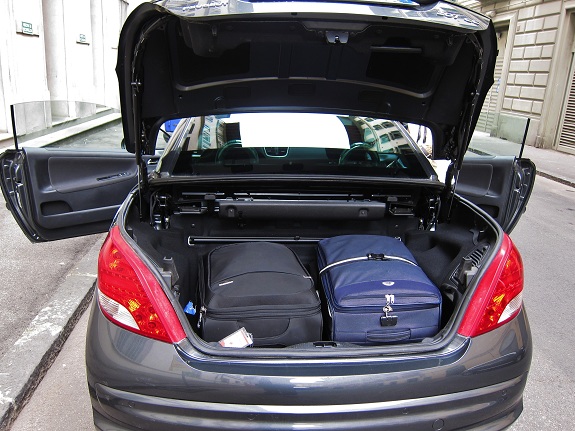 As you can see from the above picture, there isn’t a lot of space in the trunk of the car. Notice the black bar behind the two medium sized suitcases. Attached to that bar is a pull out cover that hooks onto latches near the trunk opening. That is the maximum height of things that you can have in the trunk and still get the roof down. When we first picked up the car we decided to test the roof while we were still at the rental location – just in case. It took us almost 15 minutes to figure out that the cover must be pulled out before the automatic roof will retract. 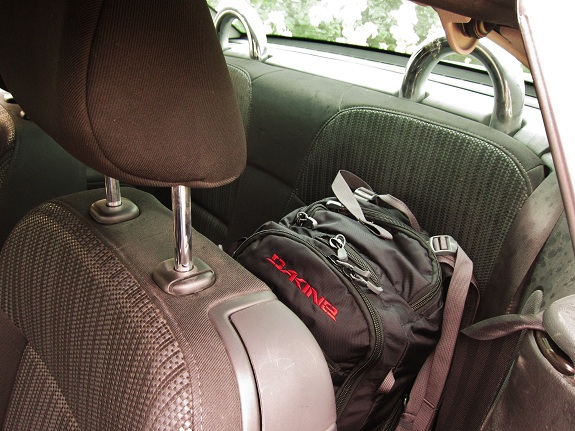 If you’re planning on driving around with people in the back seats they’d better be very small children. I’m 5’10” and with the front seat in a comfortable position there was only about 8 or 9 inches of leg room behind me. Auto Europe and Kemwell seem to only rent out the 308cc now which looks to have more legroom in the back. 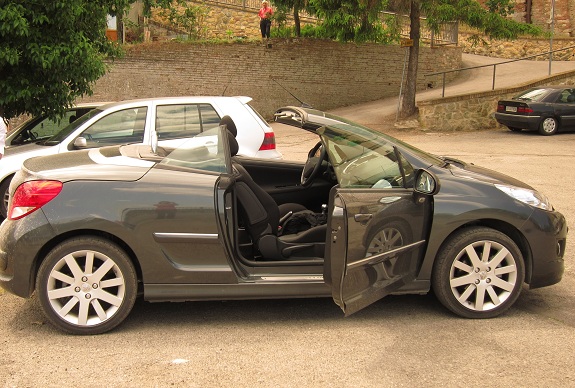 We really enjoyed driving the little Peugeot 207cc all around Tuscany. We had to leave the roof up whenever we had our suitcases in the back, but most of our touring was done with our bags back at the hotel which worked out just fine. Luckily it only rained lightly on one day so we got to directly enjoy the sights and the open air of Tuscany first hand. It was well worth the extra money spent!

Leave a Reply to paul in nyc Cancel reply