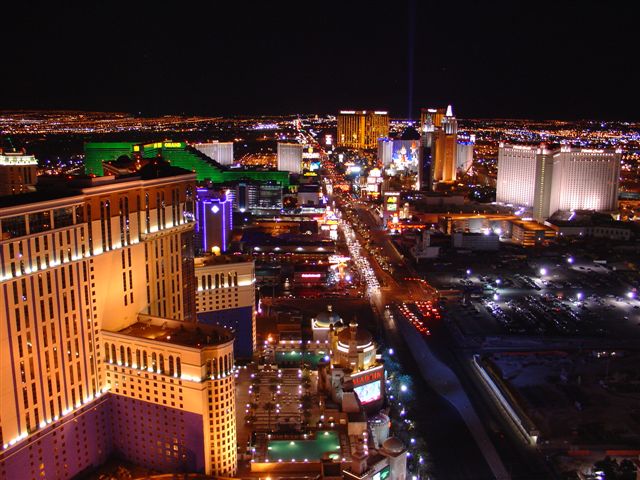 In October of 2010 we had a guys weekend in Vegas and we decided to try out the newly renovated Tropicana. The pictures looked nice, the price was reasonable, and the folks over at Vegas Chatter rated it as one of their favorites. Also, it was one of those historic places that I’d never stepped foot in so we decided to take a shot.

On arriving at the hotel we were a little concerned by the rinky-dink and dungy parking area. Apparently that part of the hotel was yet to be touched up. My worries were somehwat lessened as we came around the corner and saw the flashy new hotel entrance and lobby.

The check in process was fairly efficient, but we were a ltitle annoyed that while they were happy to charge us $20 per night for a 3rd guest to sleep in the room, they were unable to provide a roll-out bed due to fire regulations. The room we were given was reasonably spacious and very nicely appointed. It would have been great for two people and 3 would have worked if we could have had a roll-out bed. Instead, I ended up sleeping on a wingchair/ottoman combo that night. Not good, but much better than the floor I suppose.

Given that the three of us had come to Vegas primarily to gamble, none of us was overly worried about the sleep situation as we were planning to spend most of our time on the casino floor, anyways. And that’s where we ran into the deal-breaker for the Tropicana.

We walked back downstairs and explored the Casino. There were a bunch of Blackjack tables, 2 Craps tables (only 1 open), and 1 Paigow table that was not open. Yes, it was Thursday night, but it was prime-time on a Thursday night. Given that the three of us primarily play Craps and Paigow, this was going to be a problem. We decided to explore the back part of the hotel, hoping to find a hidden part of the casino, but all we found were closed restaurants. Not good.

Luckily, wireless Internet access was included with our room, so we went online and looked into booking a different place to stay for the weekend. We ended up at the Rio, which I’d never stayed at. The Rio is no longer the pary hotel that it was once famed to be (that has probably moved down the street to the Palms) but it turned out to be a a great place to gamble. It was busy enough to keep many tables open, but not so busy that you had to wait to get onto a table.  The price was reasonable and we ended up gambling enough to get the room comped anyways.

The bottom line at the Tropicana is that it is a great little hotel if you’re not planning to gamble too much, but serious players should look elsewhere. I know that we were there in the first phase of the reno, so maybe they plan to expand the casino. I’d ask them about it before you book though.