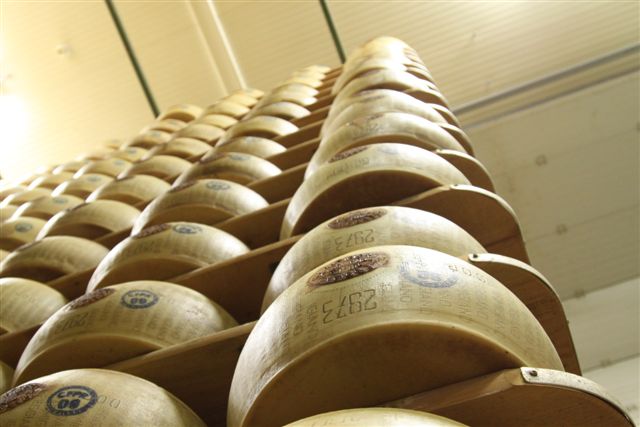 We woke up early and got ready to head out on a food tour of the area with Italian Days Food Experience. Mrs A|T signed us up for this tour based on a very high TripAdvisor rating. We got down to the hotel lobby a few minutes before Alessandro and a driver showed up in a mini-van to tour us around Bologna and Modena.

Alessandro introduced himself and helped us into the van, which was clean and had plenty of space for everyone on the tour that day. Already in the van was a young lady from Montreal and we would make two more stops to pick up 2 women from Washington DC and a couple from Manchester. We were put at ease very early on as our new tour guide cracked jokes, asked us questions about where we were from, and explained what we would be doing that day.

Our first stop that morning would be Coop Casearia Castelnovese, a Parmigiano Reggiano factory in Modena. We pulled up into a somewhat non-descript industrial looking building and were let into a large rolling back door of the factory. Once inside we were greeted by the President of the factory, and kind looking older gentleman who brought out the smocks that we would wear during our tour. Alessandro assured us that the translucent papery-white coats we were buttoning up were designed by top Italian designers, and I have to admit that they are among the more stylishly cut smocks I’ve ever worn!

Just as we were smocked a door opened and a worked pushed a cart with steaming bowls of freshly made ricotta cheese. They looked powdery and chalky (which we would find out later isn’t the case), but smelled comfortingly like warm milk. Alessandro lit up as he described the fresh ricotta to us and lead us into the next room filled with stainless steel tubs and copper vats full of milk.

I’m pretty sure the tour timing was arranged just for this, but we had arrived at the precise moment that the cheese master magically turned the warmed milk into curds. He checked the temperature of the vats and added the rennet. He then left while the milk magically turned into curds invisibly in front of us.

While we waited Alessandro did a great job of fielding questions and seemed genuinely delighted when I asked a question that stumped him. He ran to over one of the factory workers with a line of questioning in Italian before coming back with a big smile and an answer.

Finally the cheese master returned and manually checked the consistency of the curd by running his hands through the mixture. After checking it a couple of times, he dipped a large broom-sized whisk-like device into the vat and cut up the curds into the appropriate size. After sitting for awhile two other workers used large sheets of cheesecloth to scoop all of the curds out and let the whey settle out. 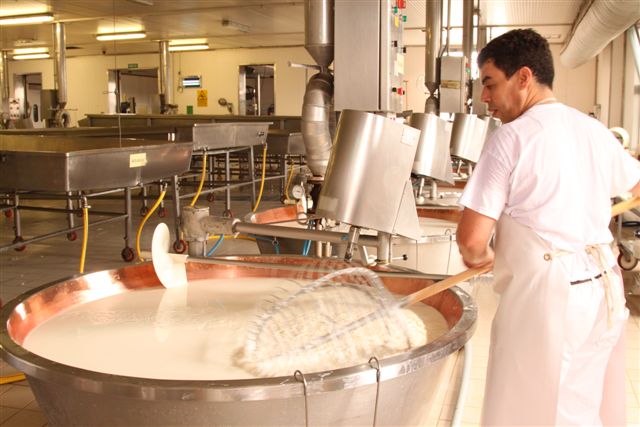 The next stop on the tour was the shaping room where we got to see the moulds used to shape the cheese into the well known Parmigiano Reggiano shape. 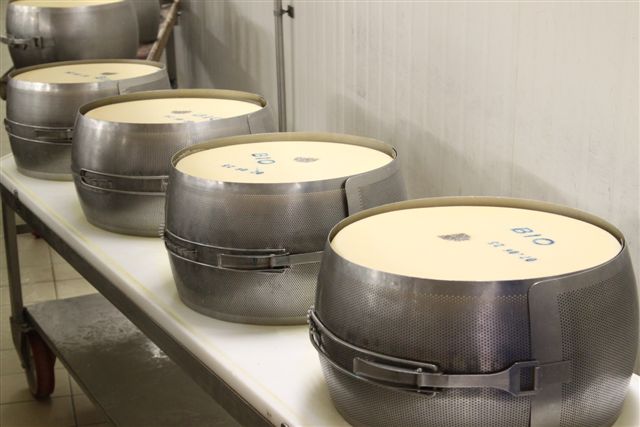 Alessandro gave us a lesson on how to read all of the markings imprinted onto the side each wheel of cheese. 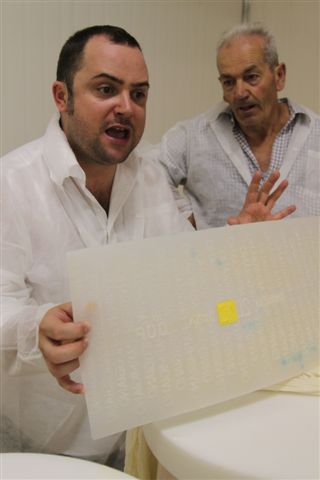 Next we went to another area of the factory where the brining process of the cheese making process was described and saw 100’s of wheels of cheese sitting in salt baths. 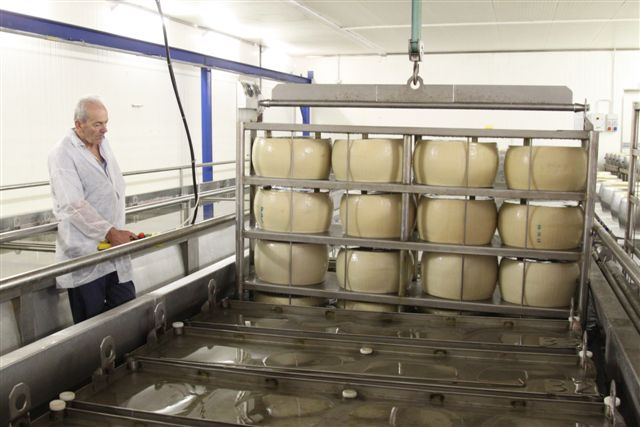 We then waited outside a set of doors that were opened to reveal the cheese aging area of the factory. We entered a warehouse of 1000’s of cheese wheels in various stages of aging. Rows and rows of cheese were stacked up on shelves and that beautiful milky-creamy smell in the air was punctuated with the sharp cheesy punch in the nose of parmigianno.

They walked us through the aging process, how the cheese was tested and rated, and how the wheels were turned and cleaned automatically by machines that work their way up and down the aisles. We even got a chance to tap on some sample wheels of cheese to see if we could hear any hollow spots – an indicator that a particular wheel cannot be aged long enough to become real parmigiano reggiano. 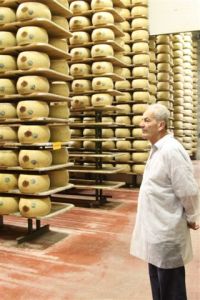 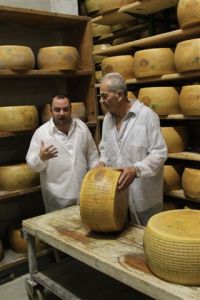 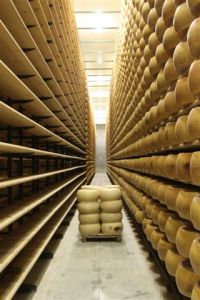 After coming out of the warehouse, we were lead into a small room where we first watched a short video about the cheese coop and then were allowed to sample some cheese which was amazing. Available for sample were large chunks of parmigiano reggiano which we sampled with a little mid-morning sparkling wine. In addition there was some fresh ricotta that we had seen earlier that morning that was creamy and delicious. Alessandro then told us try dipping the parmigiano reggiano into the ricotta and eating both at the same time. Wow. The man knows what he is talking about. There was also a spread that was made by melting the parmigiano reggiano with cream. I probably had about 10 crackers spread with this stuff it was so good. 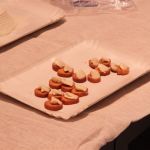 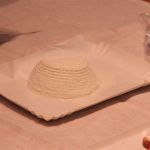 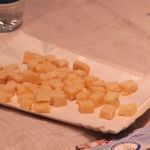 I’ve tried making the spread at home, and have failed miserably both times as it always seems to break. I wonder if these is something different about our milk here in Canada? I’ve also since discovered that Costco sells Parmigiano Reggiano at much better prices than the big chain stores. When I told Alessandro that this cheese back home would cost me about $15-20 for a chunk the size of my fist, he told me that in Italy that would buy a quarter wheel.

This was an amazing start to our tour and we looked forward to checking out an Acetaia to see how they make authentic Modena balsamic vinegar – Aceto Balsamico Tradizionale di Modena.