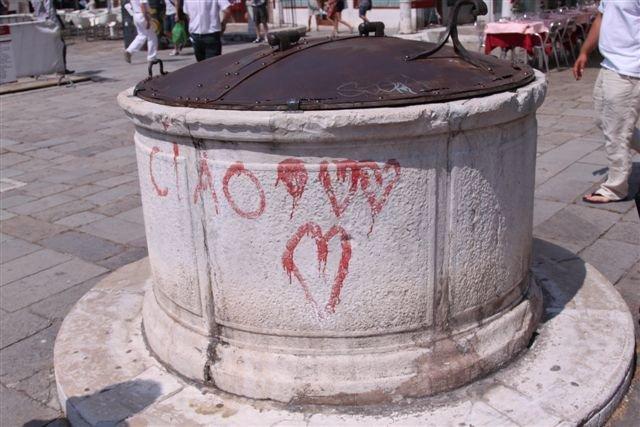 It’s our last day in Venice and we’re excited about seeing the rest of Italy. After getting my first decent night of sleep I’m refreshed and ready to get going. We had decided that we would try to catch the 1:30pm train out of town so we take our time packing up and take one last quick walk around Venice. Mrs. A|T wants to buy some silk scarves as gifts, but given that I truly despise silk scarves, I convince her that we’ll probably be able to get them cheaper elsewhere.

We get back to the hotel and checkout. The DD724 Charming House is a great hotel and I would be happy to stay there again if we ever end up in Venice again. The staff kindly takes our bags down the little luggage elevator and we head out on our way.

We walk out to the Vaperetto stop and buy new tickets as our passes have expired. Being mid-day, the boats are really full. The small area they have for luggage is full so just lean our bags against the pile and stand over them, swaying with the crowd of people as we roll down the canal.

It’s hot and uncomfortable. At one point a boat ahead of us slows down so the Vaperetto pilot goes around. I guess they didn’t like that because they then pulled up beside and a stereotypical Italian traffic argument ensued – stereotypical except, of course, that we were on boats.

We get to the train station around noon and try to figure out what to do. There is a reasonably long line up of people at the ticket desk, but there are loads of ticket machines with only one or two people in front of each. We decide to give the ticket machines a try and end up splurging on Eurorail tickets rather than regional – likely influenced by having just escaped the mass of humanity that was the vaperetto. There are no more tickets for 1:30 so we end up on a 2:30pm train with second class tickets. Based on my research we’ve been told that second class tickets are 90% as good as first class and 60% of the price. We have some time to kill at the station so we look for some food. Note: Venice has great food, just not at the train station. After waiting around our platform assignment finally appears on the screen and we make our way down to the train. You can tell the tourists and the newbies from the locals because we all seem a bit concerned that the train number on the assigned platform doesn’t match the number on our tickets, but we realize that everyone has the same problem we proceed to board.

Once on board, the tourists again show off our ignorance of all things train. At one end of each car is a rack for luggage, but not much luggage. The racks close to our seats are full, and I’m forced to put the bags in the next car, which naturally worries me a lot. Luckily, as I’m trying to figure out what I should do I see some locals slide their bags in between the back-to-back seats on the train. Aha. I un-rack my bags and head to our seats to show off my new discovery to the wife. Upon seeing this, some other tourists try to do the same, except they have enormous suitcases which won’t fit there either. They end up staying in a different car. The ride to Bologna is pleasant. Second class is, indeed, pretty nice. I don’t get a chance to see what first class looks like, but I really have no complaints. 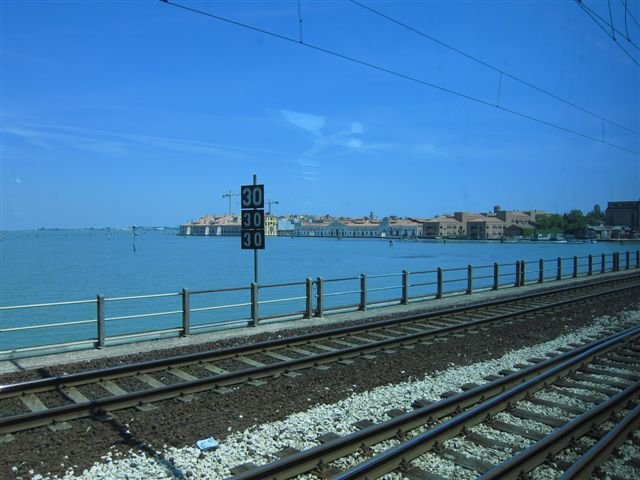 When we arrive at Bologna we get off the train with a handful of other people and try to figure out which way to go. It isn’t immediately obvious which way we should be going, but older couple heading against the modest flow of traffic towards an elevator and follow. They push the button but nothing seems to happen.

As we’re standing there a service looking guy comes up and asks us where we are going in broken English. I say out, and he motions for all of us to follow him to the next elevator. We hop on board and end up in some maintenance tunnels under the train station. We follow him all the way down to the end of the tunnel getting some strange looks from the workers we pass, but then emerge in the station right next to the main entrance and taxi stand. What service! In hindsight, I should have offered the guy a tip, but I was pretty thrown off by the impromptu backstage tour.

After a short cab ride to our hotel, we check in and find a nice big room at the Art Hotel Novecento. Mrs. A|T had mentioned to them that this was a big anniversary so they gave us a nice little upgrade. We unpack and chill out a little, snacking on the nice gift of flowers and a fruit plate that the hotel also provided.

It’s mid-afternoon so we decide to explore town a little. As we head out the front door of the hotel we are very pleased to find that we are around the corner from the main piazza. Mrs. We do a little shopping and window shopping before finding one of the restaurants that we were planning to check out. We got to Da Cesari fairly early in the evening so it was pretty empty and we weren’t able to get a read on what to expect. We were greeted warmly and the menu had a nice selection including a whole section of truffle dishes. We took our time reading through the menu and watched with concern as a bus full of tour-groupers came in and were sent upstairs to some other dining area.

It turns out that our concerns were unfounded. Despite some of the warning signs, the food was very good and the prices were great compared to Venice. It wasn’t the best meal we had in Italy, but it kind of felt like one of those secret little authentic mom & pop places you have at home. Yummy food made and served with care and a great price. 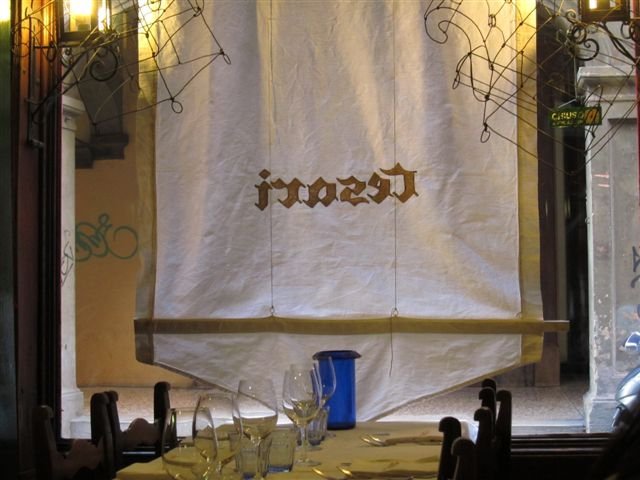 It was here that discovered that black truffles are cheap in Italy – the tortellini with truffles and steak with truffles we ordered were covered with truffle shavings. I was expecting a hint of truffle like we’d get back home, rather than a whole layer of earthy goodness over my food. It’s the white truffles that they pay big bucks for in Italy.

Finally, figuratively and literally a little drunk (back home my wife and I would never split a full bottle of wine) we decide to try finding a sorbetteria that we’ve been told is one of the best in Italy. Looking at the cartoonish map provided by the hotel, it seems pretty clear where we have to go, but as we continue to walk towards out destination the streets start to get darker, dingier, and more deserted. Every time we come around a corner I think to myself if it’s not right there we’ll turn back until we finally lose our nerve and head back to the Piazza Maggiore. The gelato in the main square would do for that night.

We finally get back to the hotel and call it a night because we’re going on a food tour first thing in the morning.